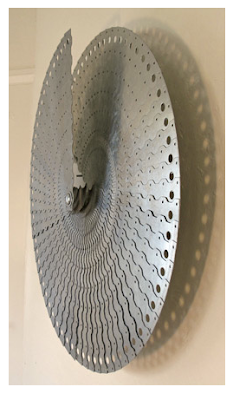 Our friend, and Musical Chairs participating artist, Randy Colosky opens his show at Museum of Craft and Folk Art in San Francisco, this Thursday, November 10th. I'm a big fan of Randy's elegant and formal, yet ruddy and accessible works. I love how Randy knows his materials intimately and manages to engage a dialogue between the form, the space, the physicality and the viewer, without seeming self-conscious or pedantic. In the interview excerpted below, Randy and curator Natasha Boas, discuss his use of and relationship to his materials, his intended economics of narrative, and how one of the pieces relates to (and is titled after) Axis Mundi, the axis that connects Heaven with Earth.

NB: You have some central themes in FIAT LUX—can you address some of them? Modular repetitions, tension, optical qualities of materials, use of empty space?

RC: Well, the elements in your list are for me poetic design tools to get at something more elusive. Fiat Lux is more an overall theme of the show, which directly translates to "Let light be made." This concept for me is my way of attempting to find ways of aligning myself with what I see is the larger creative force that is our existence-- and then exploring ways to share the inspiration I feel working on art. So utilizing concepts like iteration, fractals, quantum mechanics, chemistry, biology, physics, scale (and the list goes on and on) help me try to understand, in a more intimate way, the nature of what we are. By creating physical manifestations of these ideas, however awkwardly, helps me move toward this concept of Fiat Lux.

NB: There is a strong spiritual element to the work. Axis Mundi is a direct reference to the cosmic axis in religion or mythology, the connection between Heaven and Earth, the higher and lower realms. The image appears in art history in both religious and secular contexts. You have expressed to me that it is important that art engages spirituality as a central part, not in a religious way, but in the largest humanist way.

RC: Well first off, to be honest, I didn't know what Axis Mundi was when I was making the piece (laughs). The concept for the piece started around the idea of how rain falling for some can cause a catastrophic situation but for others rain falling can be a solution to a catastrophic situation --but in the end the rain is rain either way. The overall idea was based in Buddhism and how natural elements function in our world. 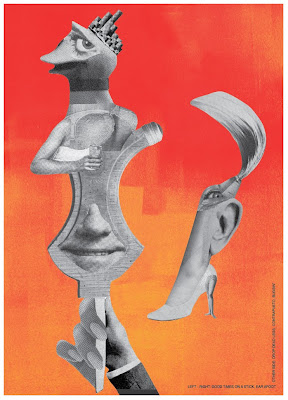 Below, Rob describes his process of the three states of materiality that his collaged forms take in this show:

“Select areas of imagery are first dissected, then carefully brought back to life one connection at a time through the surgical practice known as collage. This life, as these frankensteined “originals,” is similar to childhood- finite in time that it exists, given the nature of the materials used. That childlike existence is then captured and brought into adulthood when I create a second life as these “characters” are re-imagined and printed and painted on wood. Finally, if their Creator is inspired enough by their previous existences, they make it into the spirit-world through film and animation. It is here they are finally allowed to move and have everlasting life. I am interested in taking these collages to a “larger than life” place by physically reproducing them on a large scale, and animating and projecting them. In the past, similar collage works have only been shown in small frames with a magnifying glass. Now the work will be accessible from anywhere in the room.”
-Rob Reger, artist

Posted by Gallery Extraña at 9:40 PM No comments: 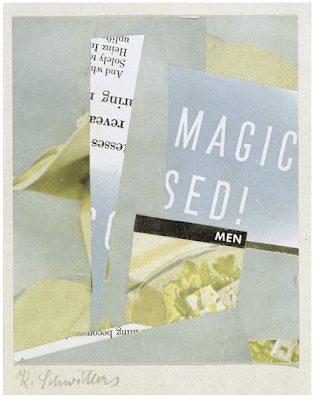 On Sunday, Aug 14 the Berkeley Art Museum is hosting a collage making session with SF artist and progessive politician Matt Gonzalez. The collage session is in conjunction with their Kurt Schwitters exhibition which opens August 3. Various members of the San Francisco Collage Collective (including Gallery Extrana co-founder Rob Reger & myself) will join Matt and the public in a collage making session inside the lovely BAM galleries-- it's been a while since we've had an official SF Collage Collective public gathering -- I'm excited to see what materials everyone brings to work with : ) Come find us at 2pm in Gallery B! Also on display at the Berkeley Museum is our friend Desiree Holman's AMAZING show Heterotopias which investigates our fascination with real and fictional personas in fantasy play -- her avatars make me wanna dance! 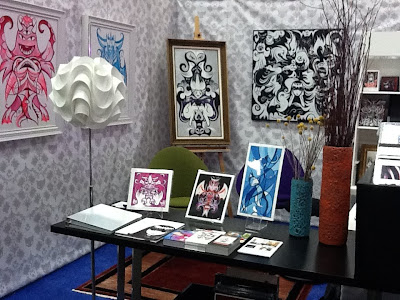 greetings from comic con! we're here helping our friends Emily the Strange with a gallery next to their booth -- a little calm spot to hang and see art -- someone said we were a respite in the storm of the crowds and aggressive imagery --- we agree. : )

We are featuring Emily's creator Rob Reger's personal work and his Emily inspired fine art, along with Buzz Parker's detailed illustrations, work by cut-out artist Turo Scissorhands and Reger's collaborative prints with punk photographer Jenny Lens.
Our living room set up is much cozier thanks to our friends at Boomerang for Modern, a beautiful mid-century design store in San Diego's Little Italy. Thanks Boomerang! If you're at the con, come visit us! Booth #4637
XO
Posted by Gallery Extraña at 5:11 PM No comments:

fave photo of the week. 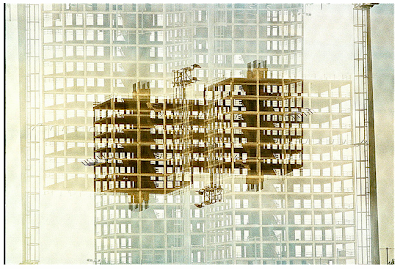 My favorite photograph of this week, perhaps this month is this image, Edifi by Argentine photographer, Fernando Maubecin. Fernando has been working on his Double Exposure Series for a decade now, and I've been consistently impressed and really taken aback by the luminosity, depth and resonance of the work.
I love how the gold buildings in the center seem to be a nucleus for the unfinished architectural shell that fills the frame. I can't help but think this is the soulful, light-as-god work of Andreas Gorsky's antagonist; the potential emotional side of Gorsky's twin psyche. Light. Structure. Texture. Form.

I don't know the story behind this image in particular, however, in his earlier series, I know he was interested in making a mini-narrative composite of time, space and the elements. This image, Luziwet was exposed as a full roll in Seattle of water images, then exposed again on the streets and interior public & private spaces of New York City. Can anyone recognize that light source? 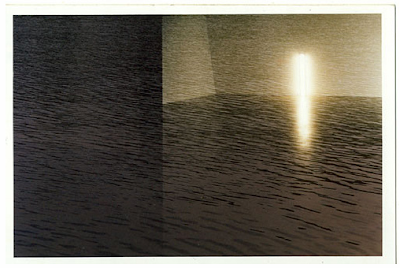 Both of these 35mm images were shot on his Nikon F4 (the all metal parts, big ton of tool, single lens reflex) a camera that was introduced in 1988 and for anyone still shooting 35mm (Is Anyone Else?), it's still a totally amazing and capable camera. Obviously, Fernando is an old school, technical and yet intuitional photographer. He sees light. He plans for the composition in his mind. With this Double Exposure Series, he has two processes: one is to shoot a whole role of 35mm film often choosing to focus on texture and the materiality of light, then he re-exposes the film, frame by frame, keeping in mind the amount of light exposure that has already saturated the film in the first take. His other process, made possibly by the Nikon F4's exposure lock button, allows him to plan the image, shoot, and then re-shoot immediately. I can't tell you just how pleased I am that Fernando continues with this series. Take a look at what's come before and some of his recent work on his flickr site. And keep your fingers crossed that we'll be able to bring him from Valencia, Spain for a show. 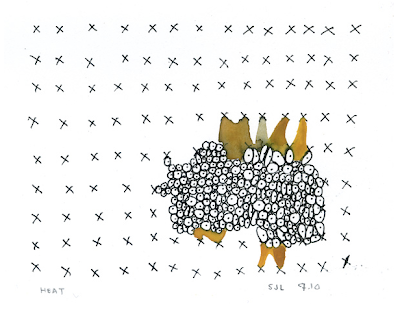